For quite some time I’d been pondering, and frankly, struggling to articulate, a concept that relates to the things in life we simply MUST do.

On a direct note…I was pondering this in relation to fitness, but knew even before I’d completely formed the thoughts, that the concept applied to success in anything. 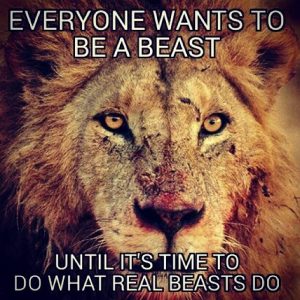 Some things, work/career as an example, are things that as a man, are expected and required of me. These things are also excused…tolerated…allowed…by our social structures, law, family expectations, and other relationships.

As an example, when a man has to say, “Sorry, I can’t do [insert whatever activity], I have to work.” he is basically excused. IF there is resentment by the others in his life, it is to the TASK…not to the man. Much like simple breathing, society just accepts that he will DO these things, and it seldom even occurs to others to demand that he stop.

After all, he’s just doing his duty, fulfilling his obligations to society, the state, and his family. It HAS to be done, and he’s the one to do it.

No one questions his motive or drives. There are allowances even in the law for these activities. Hardship drivers’ licenses, exceptions to curfews (I’m thinking age-related ones here), and there are other examples.

There are several things that can fall into this sort of category. Work, protection of his spouse/family, maintenance of his property, and others.

The problem comes in that there are things that should be in this category, that simply are not. There are things that must be done, that societal expectations and family structures pressure us to postpone…to move down the list in favor of other things.

I’d been struggling with what that category IS…as I had some things I needed to add to it. It was evident to me at least, that my very life depended on it.

The concept was that these things MUST be as required, allowed, permitted, and expected…as breathing. An easy description of the concept was for some reason eluding me.

Credit Where Credit Is Due (also, some good reading):

At this point I’ll credit Tom Nikkola’s blog post: The Non-negotiable Approach to Succeeding at Fitness (and life) for giving me the word. It also strongly illustrates the concept I’m on about, but I already had that…check it out though, it’s a good read.

That word is “non-negotiable”. As a concept it is self-evident.

Incidentally…more reading…Tom’s post: Five Simple Habits for Better Men’s Health is how I found his blog in the first place…and it’s a post I strongly agree with, and frankly, is working amazing things in my life. Pretty fundamental if you’re a guy…but sometimes life gets in the way and knocks us off kilter and we need those fundamental things pointed out to us (slapped upside the head might be a better term).

My “out of kilter”…has gone on for more than 35 years. Literally everything and everyone has been higher on the list than my health. Time to change things, yes? But HOW?

That brings us back to the point.

When embarking on this fitness push, I had to force a fundamental shift in thinking. It’s a difficult thing to do, but I had to put myself on the very, very top of the “to do” list. I’ve spent my life doing what I must and helping others…crawling out of poverty provides a very particular formative set of challenges and lessons.

Those lessons stick. My own health, fitness, and well-being never really came to mind. On the few occasions it did, the demands of all those other things always pushed it down into the “I’ll get to it someday” territory of the list.

We all know when “someday” comes.

It’s more than resolve…more than a simple decision. This is a MUST, or I will not succeed.

Thoughts began to gel when I began pondering the whys of my successes in other endeavors and the reasons for my abject failure in this one area. Three keys resolved themselves quite quickly:

It’s hard…mind-boggingly difficult in fact…to explain to family, spouse, the boss, whatever…that no, I will NOT change this [thing], even for you. Even just this once. ESPECIALLY if this [thing] is purely selfish…just for MYSELF.

I’m still struggling with the concept that it’s NOT selfish. My brain knows this. I HAVE to take care of me or I cannot take care of others. But my ethical and moral keys formed over a lifetime of fighting tooth and nail are quite difficult to ignore…or change.

I will NOT change this for you?

“Will NOT” is a re-director. It puts the resentment on the man, not on the task. That’s a fast path to loss of needed support and a direct route to failure.

I CANNOT change his for you? There we go…

THAT, I realized, was what was required. Not just for society, spouse, friends, work, etc…but for myself. It would be too easy otherwise, to put it off, postpone, or skip it for other, seemingly more important tasks. I HAD to do this thing. It was not optional. It was…it MUST be…non-negotiable.

That is not “helpful” to succeed…it is essential to success.

When I made the decision to “win the war” in this push, I sat down with the wife and explained to her what I was about to tackle…and what it would take to succeed at it. I have failed at this thing for my entire life. There are lessons dispensed in abject failure. Even this thick head eventually begins to grock what those are and how to cope with them.

Non-negotiable is the key. The task is simple in concept, but quite difficult to actually DO. It’s not the hard work that’s the problem. I’ve never been afraid of hard work.

It’s the list of things in life to work on…that’s the problem. I’m simply not on it.

So fixing that is just adding something to the very top of the list. Something non-negotiable. Simple enough…as a concept. Far more difficult in execution.

That cute little short gal that for some reason shares her life with me has always supported me in my endeavors, but “non-negotiable” is a strong word. Then there’s the small matter of other family, bosses, and the like.

With some discussion about the concept (equating it to going to work everyday) we managed to modify the list.

The addition was simple:
1) I will learn how to get/keep myself fit (get training).
2) I will work-out at least 4 times a week (I’m usually managing 5 or 6).
3) I will eat appropriately to achieve my goal.
4) Once I achieve my goal, I will do whatever it takes to maintain it.

These items are on the very top of my “to do” list. They are non-negotiable. I can’t barter them away, modify them, or change them unless it is appropriate to achieve the goal they were created for.

It’s a bizarre feeling/concept for me…I’ve literally never been on the top of my list before.

I know this will seem simple to some folks…but not to put too fine a point on it…most folks fail.

The vast amount of determination of success is a head game, and the head is the hardest thing to get into the game.

…and I’ve finally got my head in the game.

The question is…can I keep it there?

The real question is what it will cost me?