The dude was saying something about general anesthesia…but first a nerve block…digging around in my shoulder with a big-ass needle…they were already feeding me some happy juice in the IV so his voice was sounding quite a bit like the teacher’s voice in Charlie Brown.

I got the gist of it though…nerve block. Big needle. Ultrasound. THEN general. I’d have much preferred a different order to those things but apparently they were gonna need to talk to me after the nerve block to make sure it “took”.

Well crap. This is gonna hurt.

I’d rather not. Go away. Sleeping. I decided I hadn’t actually said that out loud and took a breath to do so.

“Good. But Mr. Meyer! I need you to breathe deep.”

Damn. I wish that voice would go away. But I kept having to breathe to tell it that, and I never seemed to actually get the words out. Durn thing kept interrupting.

Dunno. What’s the macros and calories on those? Again I couldn’t tell if I said it out loud.

It spoke with some authority. I decided that for some reason it was going to force me to cheat on my diet. The gravity of the situation became clear as I was suddenly aware that my right arm was strapped down and I wasn’t wearing any clothes. There was more than one voice too.

Whoever the fuck they were…they were SERIOUS.

Probably my trainer. Some sort of test. Yeah. Made perfect sense.

“Mr. Meyer. We want to get a little something in your stomach. You haven’t eaten in 18 hours or so. Saltines or animal crackers?” I caught a glimpse of the speaker this time…she was distinctly blurry.

My trainer is not usually blurry…even at the ungodly hour I tend to work out. He’s a HE too…come to think about it…probably not him then. He’s generally pretty straight-forward anyway. Perhaps a nightmare? Could be that.

Fuck it. If I’m gonna cheat on my diet in a Machiavellian nightmare I may as well go big.

“You want water or soda or juice to drink?”

Great. Another choice to make. They were coming easier though.

That got a laugh. “Just what’s on the menu kid.” 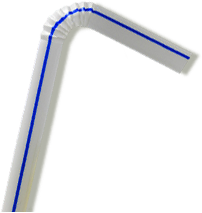 Suddenly I was sitting up and there were a few animal crackers scattered on the table near my chest. I was casually holding a can of Diet Coke in my left hand. It had a bendy straw in it.

“Bendy straw!” I know I said that out loud. I’m also pretty sure I laughed like cheerleader on helium. Bendy straws are friggen COOL!

My right arm was distinctly missing. That sobered my mood.

I stopped trying to make sense of it all. I was obviously missing a key piece of data. Well…that AND my right arm. I set the Coke down and reached for an animal cracker.

I looked around in confusion. Why was I holding an animal cracker? I stared at it incredulously. Especially one with no icing.

Yep. Clearly I was missing something.

Yeah, you’re missing your brain you twit. I’m still not sure if I said that or not.

…and I had it. 100% in fact. Clarity, vision, memory. Yep. Shoulder surgery. Right arm strapped down to my chest. Still naked. Still holding an animal cracker with no icing.

I croaked out a laborious “Owwwww!”

Hey, at least I had animal crackers.

I stared incredulously. But they had NO icing. WTF?

Turned out not to matter though. One of the drugs they give you under general stops all your various “secretions”…saliva being a key one…and as soon as I decided that an animal cracker with no icing was better than…well…the OTHER animal crackers with no icing that I had to hand, I tried to chew it.

It simply turned to dirt in my totally dry mouth.

A sip of Diet Coke washed it down as a flavorless grit.

Great. Cheating on my diet, naked, with no icing and no flavor.

Maybe back in the nightmare then?

This entry was posted in Humor, Ramblings, Weight Management. Bookmark the permalink.