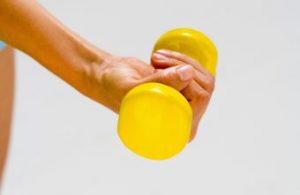 Life is full of small things. Oh, big things too…but it’s often the small things…those things anybody should be able to handle…that overwhelm us.

Picture a 3-pound dumbbell. Cute little thing. Pretty much anybody should be able to pick one up. It’s a small thing. Most can handle two. Or three. Or more. They are, after all, just small things.

But if I keep handing them to you…these small things…eventually you will reach a point where you can’t manage them all. You may not be able to take another. Or you might take one, and drop a different one. Or, as happens on occasion, you take the additional small thing, and suddenly drop them all.

Anyway, typically I don’t eat before-hand. Exercise and pain on a full stomach tend to make me queasy. Being tortured to death is ever so much more unpleasant if you are actually hoping to die during the process.

Then work…yanno…the career…the thing that pays for all these shenanigans. Due to the timing, I occasionally hit the local diner for breakfast after PT and before work.

All this to say, small things can matter more than you can possibly understand. Inconsequential courtesies, preformed basically as a habit, without thought or expectation of acknowledgment or award, may mean nothing…or possibly everything.

Pulling the big Valk hard right off the street and into the near vacant parking lot of the shopping center, something struck me as amiss. It took me a moment…when riding, that’s the focus and anything not directly related to that challenge is filed to a back burner for processing as I can get to it.

I’d made the turn hard and quick without slowing much because despite my turn signal, the cage behind me didn’t appear to be aware that he was about to run over that 1000 pounds of man and machine directly in front of him. I didn’t risk it, and turned at nearly full speed and bled off the excess in the parking lot. I killed the blinker and headed down the aisle toward my favorite diner.

“BING!” my brain chimed in. “Data in the shunt requires additional processing.”

This is my brain’s kind way of saying, “Pay attention you twit, something’s out of place!”

At low speed in a nearly empty parking lot, with nobody nearby trying to run my ass over, it’s pretty easy to ponder the rest of the world.

Yep, out of place. A lone car, parked in front of a couple of the “not yet open” businesses in the little strip center. A woman standing beside it looking at her phone.

Not too weird. But…

Middle aged (my age, just when the hell did that happen?). Well dressed. Short skirt, long legs, nice top. Not the “trying too hard” look, just pleasantly female. The type of look that seldom happens by accident. She had crafted it. She was good at it.

Again, not too weird.

But she was crying. I could see the tears. Body language suggested just a hint of frustration…and defeat.

I blinked, and swung the Valk around, pulling into the space beside her, but on the opposite side of the car. It doesn’t do to startle folks that might not be interested in my presence. Large bikers, dressed in black, can have that impact whether we wish it or no.

“You okay?” I asked her surprised face. She was already reaching for the door handle to get back in the car. She paused.

I raised an eyebrow but otherwise didn’t comment. The tears said more was going on here than that.

“Where are you trying to be?”

“I was supposed to meet a friend,” she blushed, “I’m late. And lost. And it was going so well.”

“A place called ‘Judy’s’. Supposed to be at Arapaho and Jupiter.”

I raised the other eyebrow, but carefully didn’t comment, grin, or otherwise express emotion. We were, quite literally, sitting in their parking lot.

I said evenly, “My favorite place, they’re very good. You’re right where you aimed for.”

I turned and pointed at the large and obvious ‘Judy’s’ sign at the other end of the small strip center. Giving her a little wave I backed the Valk up a half length, did a smart u-turn, and headed for a parking space closer to the coffee.

“Oh! Thanks!” she said as I rolled by. Her relief was tangible.

A couple minutes after I was seated and sipping my first cup of coffee, she entered, much more composed, and paused at my table.

“You must be married…or have a lot of sisters.”

I chuckled. “Married. Nearly 30 years. Sisters too. Why?”

“I was being silly and you didn’t laugh at me.”

At this I grinned. “Nothing to laugh at. You obviously had something else on your mind.”

“Well, thank you. You’re very nice.” She then joined a gentleman a couple booths down that had been waiting for her. He stood and smiled in polite deference as she took her seat. My brain read it as “a date” in a newish relationship they both thought was going well.

They settled in to an animated discussion over what was no doubt a nice breakfast.

After enjoying an excellent omelette and about 5 cups of coffee I felt prepared to head for work. I’m much less likely to eviscerate somebody with a grapefruit spoon after I’ve had that 4th cup. The last cup was “just in case”.

I’ll have a couple more after I get to work. It’s for the best. Civilization lasts longer this way.

As I went to pay my bill the cashier told me it had been taken care of by the lady “over there”. Her gentleman’s back was to me at this point so I gave her a smile, mouthed ‘thank you’, and then a thumbs up. I never argue when somebody wants to buy me breakfast, even if I think it’s not needed. She carefully nodded in return.

Something happened here. I’ve no idea what, and though I can imagine or guess, I’ll never know for sure. Doesn’t matter.

A small courtesy. Pointing out the “should be obvious” to somebody that was clearly already stressed, with respect and without irritation or derision. It takes no effort, and costs nothing.

It meant nothing. Or perhaps it meant everything. Or maybe it was something in between.