Notable at breakfast…an overly enthusiastic dude felt the need to get up from his meal, to come explain to me just how dangerous riding motorcycles is, and how it was gonna kill me someday…

Now…this is entirely possible…but despite the over-dramatic news stories and graphic pictures and videos folks seem almost desperate to share every time somebody, somewhere in the world manages to capture one, the statistics tell quite a different story.

Daily riding of my motorcycle, in the metro traffic, with NO GEAR AT ALL, doesn’t even make the possible top 25 causes of my “imminent demise”. With the gear and education and experience and other actions I take to moderate that risk it actually falls somewhere just slightly above getting struck by lightning. Twice.

Of course, you know what they say about statistics. Ask the motorcyclist that got struck by lightning while riding. Lightning AND motorcycling killed him. At the same time. Skewed the odds for the rest of us for decades I’d guess. 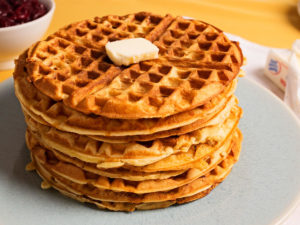 Don’t forget to add about 2 cups of syrup!

Anyway, there was some irony at play here…as “enthusiastic dude” was well over 400 pounds and his breakfast consisted of a VERY tall stack of full-sized waffles…I’d guess at least 8 of ’em…drowned in margarine and syrup. Conservatively there were around 5000 calories on that plate. Probably closer to 8000! 90% flash carbs, and the rest is saturated fats. One of those waffles a week could be a treat. He had a couple months worth.

I feel qualified to comment on both sides of this…as, yes, I DO ride (for those that haven’t been paying attention), and for decades if I walked into a room I was the fattest guy in there.

…and I know “denial” ain’t just a river in Egypt.

Motorcycling may get me someday…just like getting in my car…or walking across the street from my parking garage to work every day (the garage thing is marginally more dangerous than the motorcycle commute), but the dude preaching to me that I should quit it and “save my life”…is MUCH more assuredly killing himself.

His eating habits, size, associated insulin signatures and blood sugar levels, inflammation, and all the diseases they cause or worsen, will kill several hundred times more folks this year than motorcycling…and cars…and guns. Taken together, his lifestyle is the #1 cause of death in his age group. Taken separately, well, they are 4 of the top 5. Also 6, 7 , and 9…but it doesn’t seem productive to count that high for this.

He was preaching, not discussing, so the opportunity to point this out was lost, and had I forced the issue, would have been rejected and just made the day unpleasant.

Risk vs. Risk. When your level of risk has approached certainty, there’s little point in worrying about the minor ones.

Perspective matters…and it seems to be one of the things lost in the noise these days.

As in many things though…you’ve got to be ready to listen. I wasn’t…when I was the fattest guy in the room. I still don’t know why.

…and very once and a while, I may even have a waffle!